The Swans of A Moment Forever

Hi-di-ho, friends! I'm so excited to share this blog post with you today. Those of you who have read A Moment Forever have discovered the secret of the swans that grace the book cover. But what you don't know is what inspired them. Well, I knew that everlasting love would be the primary theme of our hero and heroine but it wasn't until this little research trip that it fell into place. Swans.

Let me share with you what the Audubon Society says: Mute swan pairs reportedly stay together for life.

These particular swans sparked the idea that led me to create the Sisterhood of the Swan, to whom the book is dedicated.

Dedicated to the Sisterhood of the Swan

re-kindled love, and finding love a second time around.

Travel with me and Mr. Cat to the historic district of Lakeland, Florida where it all began, where two young, innocent sweethearts pledge their hearts to each other in 1942.

Following our "In Search of Drane Airfield " expedition, lunchtime came around, so, I suggested that dear husband (DH) and I head into the downtown historic district, comprised of revitalized and restored buildings dating back to the city's boom of the 1920s. City blocks where former Ford, Studebaker, and Coca-Cola buildings bounded the Cash and Feed building, retail shops and the Palace Theater. I was excited to get a good look at Lizzy's luxury hotel accommodation The Terrace Hotel, built in the Roaring Twenties as the state's first year-round air conditioned hotel with arched windows and Italian crystal chandeliers in the lobby. I knew it overlooked Lake Mirror, but I had no idea of the inspiration I would find at that lake. 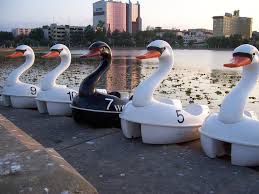 Tourists don't usually head to Lakeland, Florida. It's not really a "top" destination for visitors, but as a friend just recently told me, every town has a bit of history that we'd likely all love to discover - just like the contents of a WWII footlocker - and the stories of its owner. The details come to life with a little exploration.

That was what I found, quite accidentally, about Lakeland. Home to 38 lakes, it was one particular lake that held my fascination, surprisingly not the fact that the city appeared in the movie "Edward Scissorhands". First off, let me tell you that everywhere you look are swans - real swans, statues, depictions, and even swan-shaped peddle boats for the annual Swan Derby.

Why Swans? Well that's what I wanted to know as well. And here is what I found out from an obscure realtor website as I stood with my iPhone beside a towering swan stature in the park leading to the lake.

Native swans have been in the area since about 1923 and their population was at about 20 by the mid-1930's. Disease and predators, however, took their toll on these beautiful creatures and in 1954, the last of Lakeland's swans wound up as a quick meal for a local alligator.

A previous resident of Lakeland, Mrs. Robert Pickhardt, then residing in England, heard about the demise of the swans and decided to see if there was anything she could do to remedy the situation, so she contacted the Queen of England to ask for help.

In 1954 a large flock of swans was living on London's Thames River. They were the descendants of a pair of swans given to Richard the Lion-Hearted by former Queen Beatrice to honor his work in the Crusades.

After learning of the loss of Lakeland's last remaining swan from Mrs. Pickhardt, Queen Elizabeth graciously agreed to donate a pair of swans from Richard the Lion-Hearted's flock. However, Lakeland would be required to come up with $300 to cover the cost of catching and shipping the swans to Florida.

A former visitor to Lakeland, after hearing about the tragic demise of the swans and wanting to help Lakeland in its effort to bring new swans to the city, decided to donate the money needed. Soon thereafter, a graceful pair of Mute Swans was transported to Lakeland and released on February 9, 1957, to set up housekeeping in their new home on Lake Morton.

The pair of swans quickly adapted to their new surroundings, learning to outwit the alligators who would have them for lunch, and presently about 80 descendants of these swans live and thrive on Lake Morton and other city lakes. (including Lake Mirror)-- (Source: GoLakeland Blog http://www.golakeland.com/Blog/The-Historic-Swans-of-the-City-of-Lakeland)

I bet not many Americans know that the Queen owns the swans along the Thames and that they are tagged in a royal ceremony known as swan-upping? I didn't, but I don't get out much, especially to cross the pond. But, how can you not fall in love with a story like that of the Lakeland swans? How can you not be moved by the ever presence of the romantic swan, that mates for life, taking up residence in this small city where I coincidentally brought our young lovers in A Moment Forever? I say coincidentally because that is what it was; it just happened to be the closest city to Drane Airfield!

After visiting the hotel, strolling through its small lobby and picturing Will and Lizzy bidding one another good night with - maybe, at best - a chaste kiss to her cheek, DH and I walked down to the lake.

Of course, the hotel was grand with its gorgeous chandeliers, woodwork and all, not to mention the significance of its high-rise construction in this section of Lakeland during its boom years of 1923. However, it was Lake Mirror and its beautiful promenade, which became the focus of the trip. Created in 1928 is was the focal and recreational landmark of the city's Civic Center, made up of a gardens, bandstand gazebo, shuffle courts and lawn bowling. The lake and its promenade seawall was at its center. Ironically the promenade had been renamed in 1946 Frances Langford Promenade.

It was a gorgeous day, and once I approached the concrete balustrade, the scene of our young lover's declaration of love popped into my mind. Everything from the lily pads to the old gas lanterns (now converted) set the scene.

I imagined Will holding Lizzy's hand, resting it upon the edge. I admired the passing swans (sadly those photos disappeared into the Cloud never to be seen again!) and thought what Will would have to say about them. Poetry ... there must be something out there he would have read!

I thought of the swans again and how the ones swimming before us were descendants of a rich history - the present giving testimony to the past. Their story dating back to the 12th Century, living on. Oh, if swans could talk!

DH and I walked along the promenade, holding hands. It turned out to be a quite a romantic day for us! All because of a story - a lake - and a few swans. Poor DH, he had to listen to my chatter the entire hour ride home about what I intended to write. Don't worry ... he knew he inspired so much of it. :)

I think we'll come back for another stroll, another visit to do some antiquing in some of the local shops and for another fabulous lunch at Harry's Bar & Grille for Cajun Creole. But what we will definitely be back for in the autumn is the Lake Mirror Classic show where rumor has it a Horch rolls into town and a Chris Craft is displayed with other vintage wooden boats!

Thanks for traveling with me and thanks for reading A Moment Forever! Keep 'Em Flying!